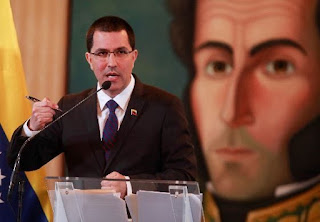 The Minister for Foreign Affairs, Jorge Arreaza, on Wednesday 28-A warned the countries of the world, about the imposition of Americanist exceptionalism that the United States Government (USA) wishes to execute, undermining the peace and self-determination of the peoples .

In its participation in the convention, said Pompeo, authorized by US President Donald Trump; an “inalienable rights commission had been created to ensure that human rights policy worldwide is based on the basic principles of the American foundation”

Given these statements, Arreaza emphasized that the “myth of ‘extraterritorial American exceptionalism’ is the main threat to multilateralism and to peace and security in the world. Taken to foreign policy it is an outrage to the self-determination of peoples. They are dedicated to imposing his model with blood and fire. ”

Similarly, Pompeo – in his speech – again recognized the participation of the United States in the coup attempts that have been executed in Venezuela since last January 23, when the South American nation broke off relations with the North American country , before his collaboration in the coup against the president of the Bolivarian Republic of Venezuela, Nicolás Maduro.

Thank you for visiting my blog, help us with likes, subscribe to our channel or if you want to support me you can make a contribution, you will be grateful
Anon Candanga need your support to keep delivering quality journalism, to maintain our openness and to protect our precious independence. Every reader contribution, big or small, is so valuable. Support Anon Candanga from as little as €1 – and it only takes a minute. Thank you.